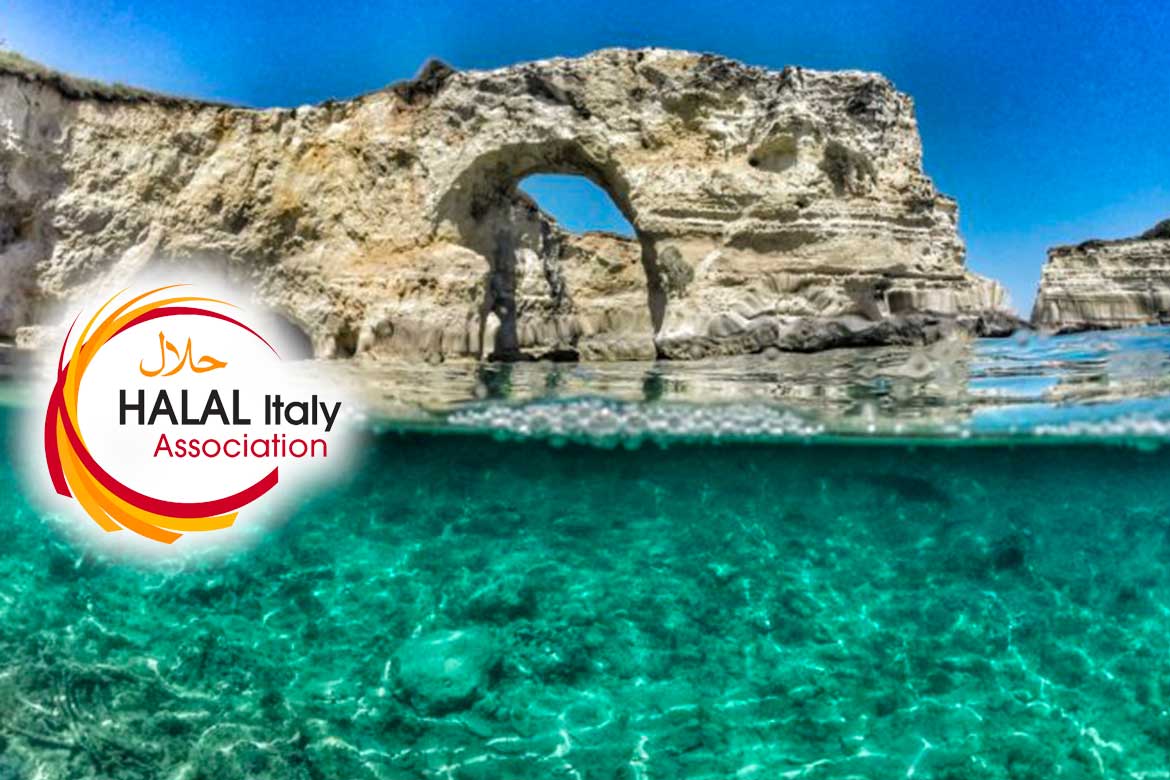 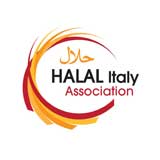 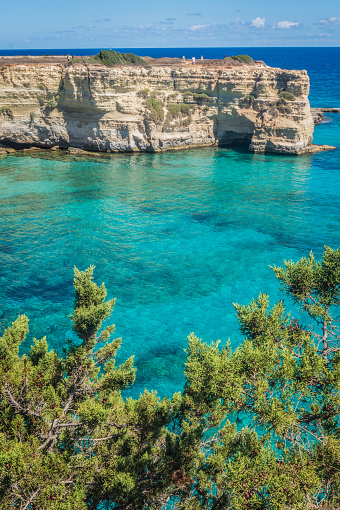 Puglia, at the southern and east end of the Italian Peninsula, often described as the "heel" of the Italian “boot”.
Immersed in the mediterranean seas, it has an extended coastline and hundreds of breath-taking beaches. Its long sunny summers and pleasant see breezes attract people every year from all over the world to enjoy a relaxing summer vacations with sunshine, sea, and exquisite Italian cuisine.
Having over 2000 years of history, it has also rich historical, cultural and archeological uniqueness. 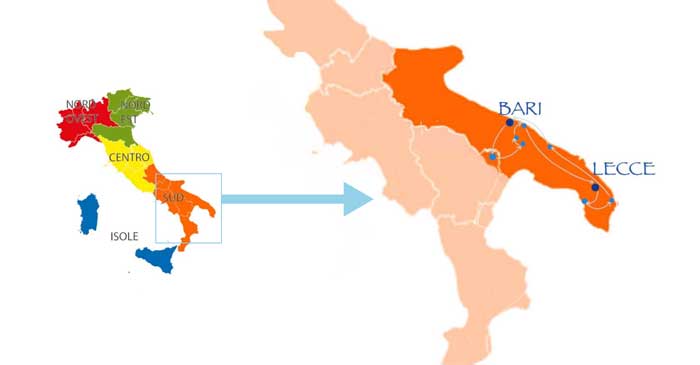 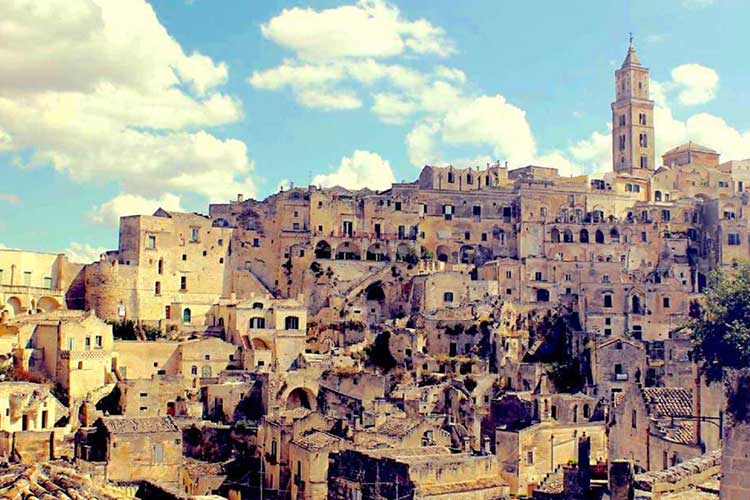 Matera is one of the most interesting and unusual tourist destinations, famous for its extensive cave-dwelling districts - the ‘sassi’. The caves of Matera had been inhabited for centuries, by the early twentieth-century the area was a by-word for poverty. Until the 1950s hundreds of families were still living crowded into cave-houses here. The squalor and malaria-ridden conditions became a national scandal and finally the cave residents were moved, by law, to modern buildings above.
By the 1980s the abandoned caves of Matera were no longer scandalous, but fascinating reminders of the past. A few residents moved back and renovated them. In 1993 the town was made a UNESCO World Heritage site, for being "the most outstanding, intact example of a troglodyte settlement in the Mediterranean region, perfectly adapted to its terrain and ecosystem”. 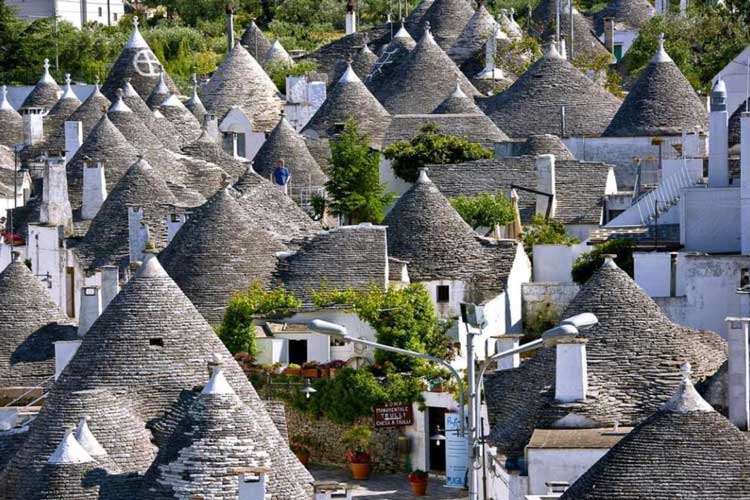 Alberobello is a strange and picturesque destination which is becoming an important fixture on the travel itineraries.
The small town has been made a UNESCO World Heritage site for its unusual districts of ‘trulli’, the characteristic white-washed conical-roofed houses of local limestone of the area. It was at first designed to fiddle taxes and fool the authorities. 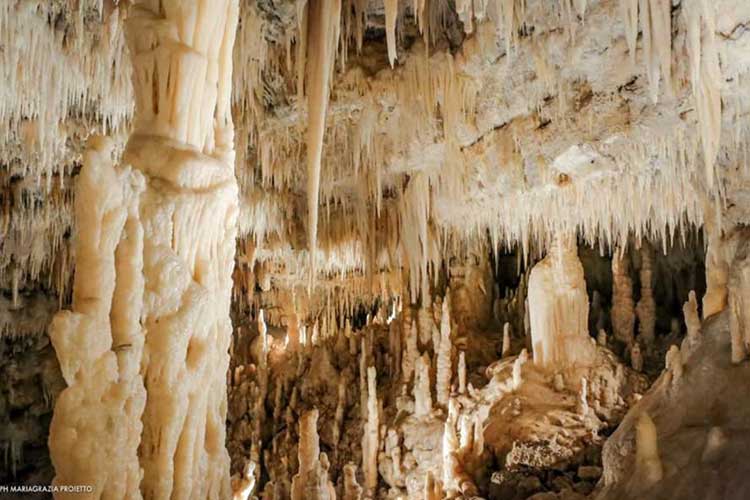 The Castellana Caves are one of the most important attractions in southern Italy. They are a system of caverns of the karst origin dating back to the upper Cretaceous, and they were discovered in 1938.
Stalagmites, stalactites, canyons and caves characterise this pathway 3348 metres in length and the point of maximum depth reaches 122 metres. Their most fascinating feature are the concretions: the mineral deposits that covered the naked walls of a cave by crystallisation of the calcite carried in solution by infiltrating rain water, that had penetrated all the overhanging layers of the rock by a very slow seepage over the years. 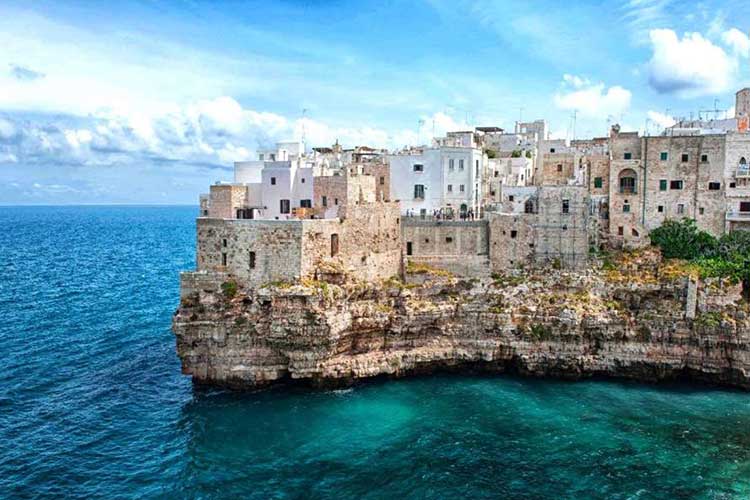 Polignano a Mare is a small town perched atop a 20 metre-high limestone cliff above the crystal clear waters of the Adriatic Sea.
It offers all the right ingredients for a perfect day out. The tiny old town, reached through the Porta Vecchia gate, combines charming, white-washed streets with beautiful old churches; and the Blue Flag beach, just a few minutes’ walk from the old centre, has crystal clear waters and is flanked on two sides by cliffs from which children and teenagers dive all through the day until sunset. 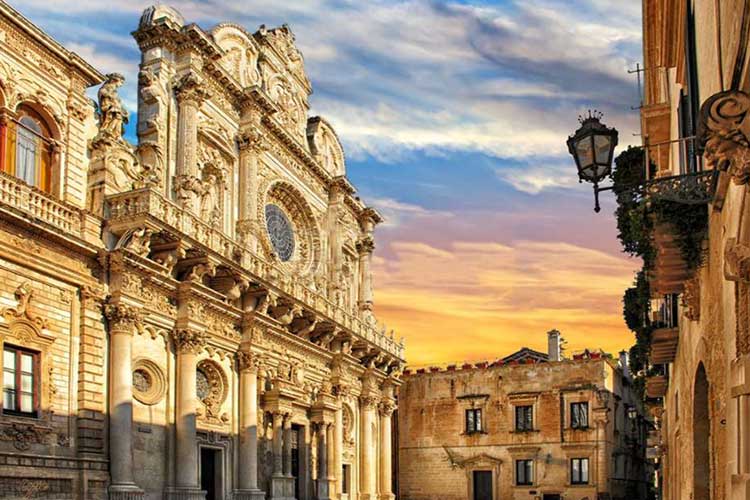 Lecce is a Baroque masterpiece of southern Italy, sometimes described as the 'Florence of the Baroque' or the 'Rome of the South’. It's surrounded by attractive countryside, seashore and small towns. The town's great artistic treasure is its architecture.
Lecce's history goes back a long way. You can still see ruins of a Roman theatre and amphitheatre, while the 17th century led to grand developments and constructions of palaces and churches. These buildings adapted the fashionable Baroque style to the soft local stone, with decorations and cherubs extravagantly covering facades and doorways. This local style is known as Barocco Leccese ('Lecce Baroque'). One can easily spend a day or two exploring picturesque little lanes and finding the more far-flung Baroque churches in its lovely historic center. 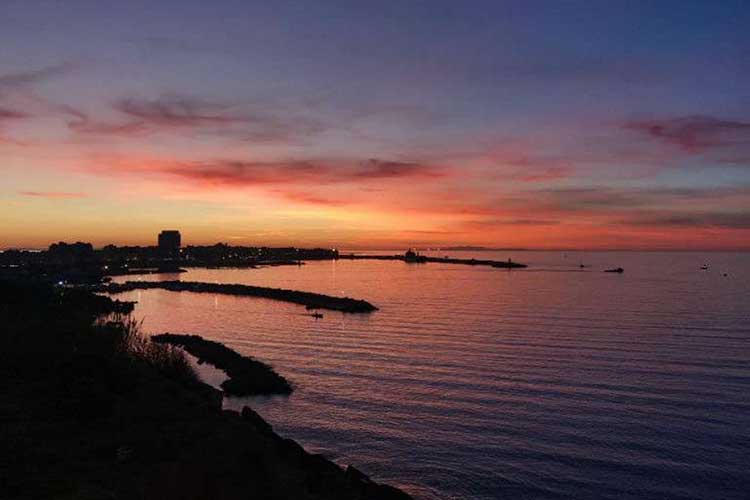 Gallipoli, known as “the pearl of the Ionian Sea”, was named a UNESCO Heritage sight in 2015. The city was founded by ancient Greeks and its name in Greek ‘Kallìpolis’ literally means “beautiful town”.
The city is divided in two different areas: the historic town and the new city. It is therefore a perfect mixture of old and modern architecture. It offers travellers the opportunity to discover an excerpt of Italian history or to try the awesome traditional dishes, and splendid sunset reflecting its coastline for centuries and that everyone must have the chance to see at least once in his life. 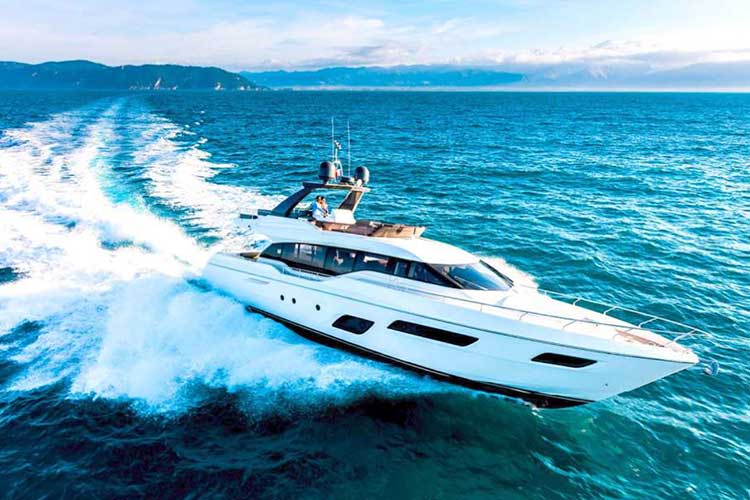 The Salento coast around Lecce Province from the west (Gallipoli) to the south point (Leuca) till the east side (Otranto) has an amazing view.
We offer half a day admiring different kinds of seashores and various shades of the seas along the coast, in car (default) and with possible upgrades in boat, small yacht, and even in helicopters.
• Boat 1 hour: 50 euro/person
• Yacht 4 hours: 800 euro/yacht (minimum 2 persons)
• Helicopter 6 minutes: 80 euro/persone (minimum 4 persons)
• Helicopter 12 minutes: 150 euro/person (minimum 4 persons) 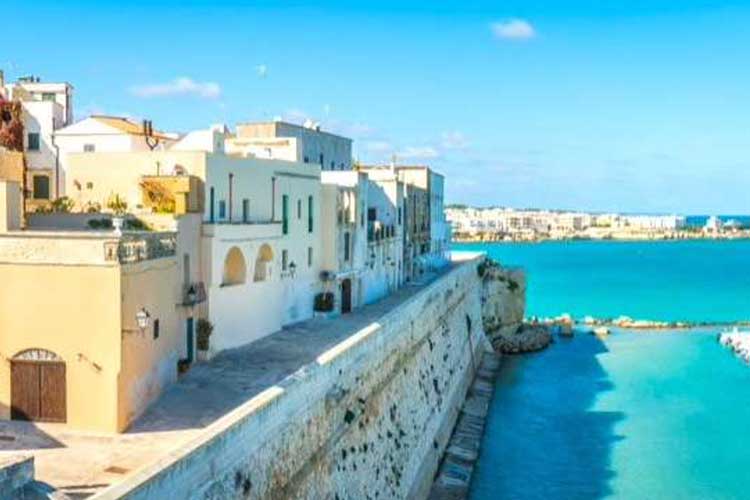 Otranto is a historic seaside town and port on the Adriatic coast of Salento. It's a small place with a lovely holiday atmosphere. The picture-perfect blue waters, white buildings and diving rocks make Otranto one of ‘the most beautiful towns of Italy’.
The town is the easternmost point of Italy. On a clear day it is possible to see over the Strait of Otranto to Albania.
Otranto's leading attraction is the twelfth-century mosaic in the town's Romanesque cathedral. Pictures within the mosaic include religious stories but also depictions of historical, mythical and even pagan figures. 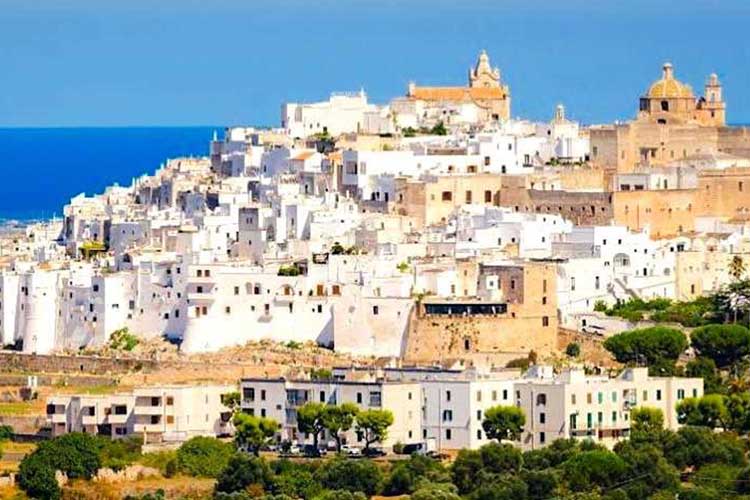 Ostuni is one of the most well-known of the ‘white towns’ (la Città Bianca) in Salento.
The town is built on a hill in the green Valle d’Itria, which offers a great view of the valley if you stand on the edge of the town.
Its historic center is incredibly photogenic, so come equipped to take lots of pictures: the narrow lanes that are so hard to photograph well in other Italian cities are here illuminated by whitewashed walls, pale stone and tiny open spaces. 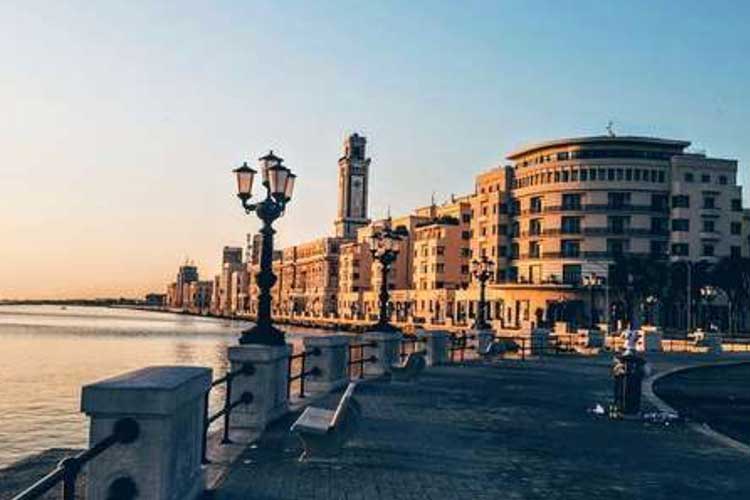 Bari is the capital city of Puglia and the second most populated city in southern Italy.
It has a beautiful ancient historical center which is also an amazing shopping area. There are retail shops of all levels, shopping centres and designer fashion boutiques.
Via Sparano is where you find the top designers’ boutiques, including Emporio Armani, Gucci, Hermes, Louis Vuitton, Prada, Red Valentino, Trussardi and so many others.
The last day we will spend the afternoon here for shopping-lovers. 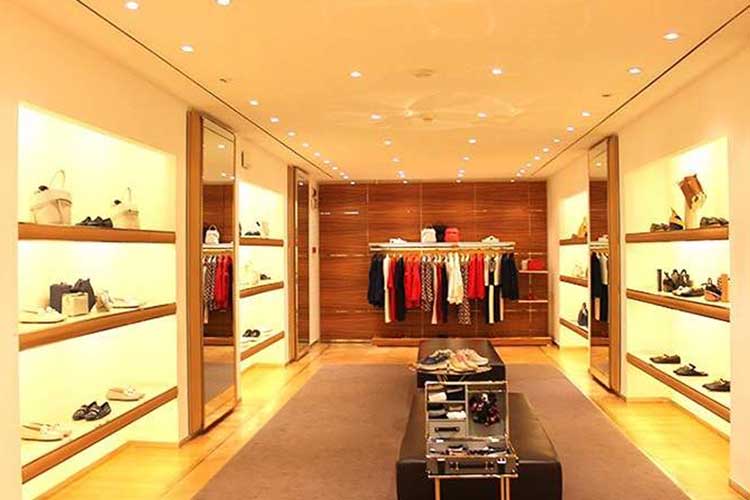 If you would rather shop at galleries and multi-brand retail shops, you can find many of those in Bari as well: Anteprima, Capricci, Cecilia de Fano, Dante Cinque and Mimma Ninni.
These retail stores carry most European designer brands, including Balenciaga, Cartier, Dolce & Gabbana, Emilio Pucci, Stella McCartney and so on.
There are some other shopping areas in and around Bari, which should not be missed: the gorgeous little town of Martina Franca is proud to have the boutiques Chirulli and Massa and the town of Fasano draws shoppers to its widely touted Cupertino boutique. 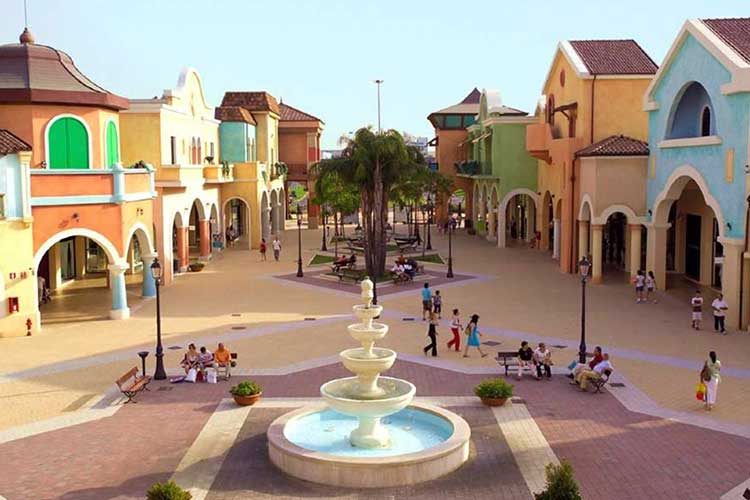 If you love shopping at outlets, near Bari there is the Puglia Outlet Village Molfetta, which has more than 140 boutiques and shops spread over an area of 40,000 sq. metres.
At the Puglia Outlet Village you can find luxury boutiques as well as more popular brands such as Adidas, Guess, Levi, and Vans. A large spectrum of designer fashions and goods could be found here including clothing, jewellery, shoes, bags, cosmetics, electronics, optics and sports equipment, and even baby stuff.
It offers various facilities and services for all ages to make sure your children and husbands have fun as well. 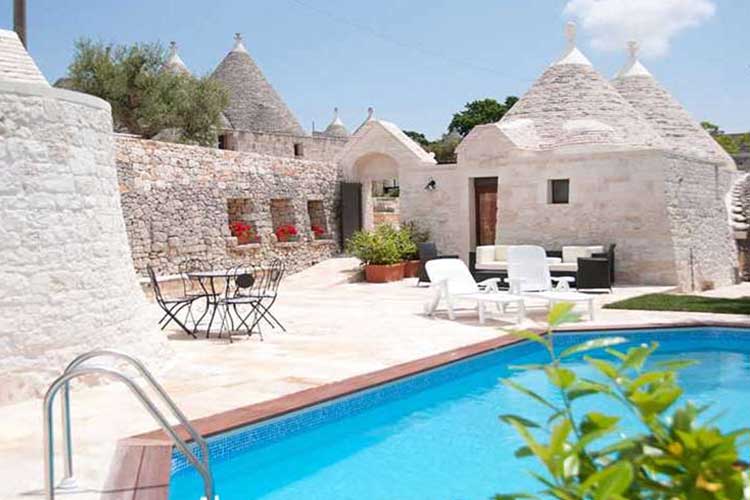 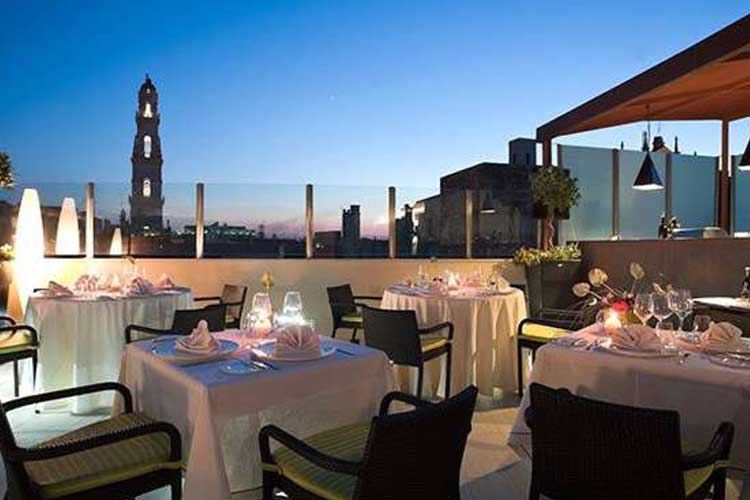 We work with most of Halal-certified restaurants in the area, who can offer predetermined Halal menu or fresh plates of choice.
We can also provide you exquisite Italian plates such as pizza, pasta, meat and vegetables within the Halal standard.
We have a wide range of accommodation resources, from single room to family room, from economic room to executive suite, from B&B to 5-star hotels and even luxury villages to meet all of your needs.
At any level of budget, we guarantee you the most comfort and the warmest service along with unique local characteristics.
Here follow some examples of the accommodation facilities we work with... 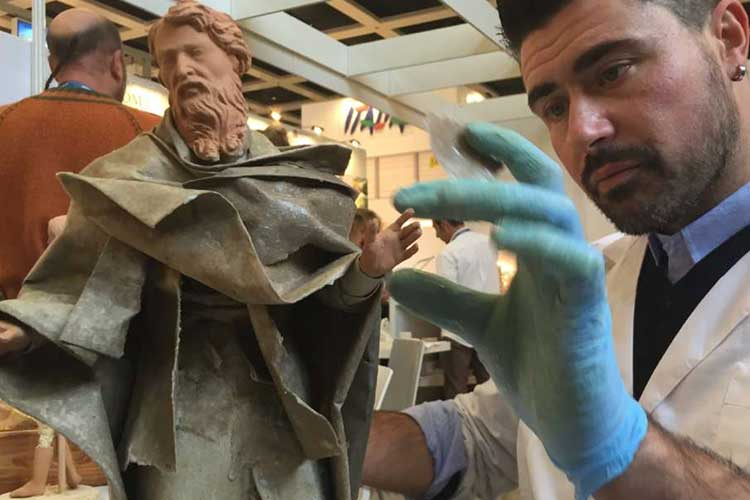 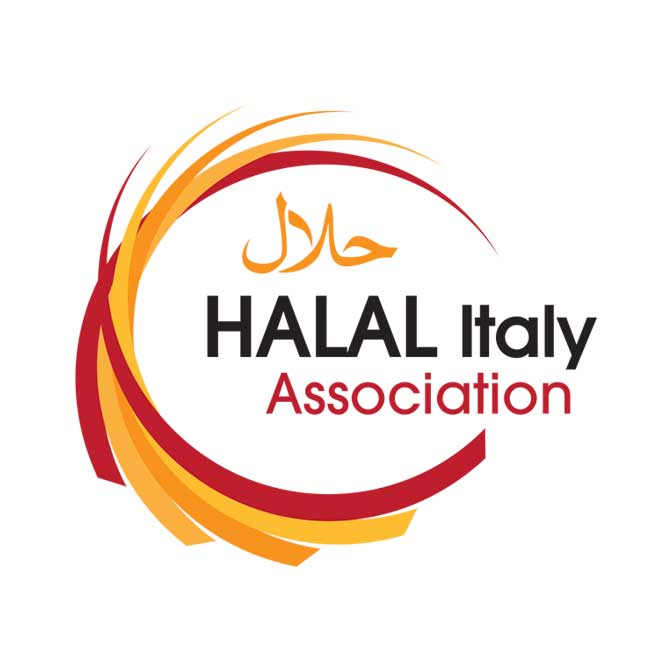